Kristen Bell flaunted her fit figure in the two-piece while hanging out on a boat and drinking with a group, in the new comedy film.

Kristen Bell, 42, looks gorgeous and fit in one memorable scene in the newly released The People We Hate At The Wedding trailer. The actress, who stars in the comedy film alongside Cynthia Addai-Robinson and Allison Janney in the comedy film,

showed off her incredible figure in an American flag bikini as she hung out on a boat and drank from a can, in the preview. She had her blonde shoulder-length hair down and looked like she was having the time of her life as she laughed with some of the other people she was with.

The People We Hate At The Wedding is set to come out on Amazon Prime next month and has an interesting storyline that “follows struggling American siblings Alice (Kristen) and Paul (Ben Platt), who reluctantly agree to attend the wedding of their estranged, wealthy half-sister (Cynthia) in the English countryside alondside their mother, Donna (Allison),” the Amazon Studios page for the film reads. 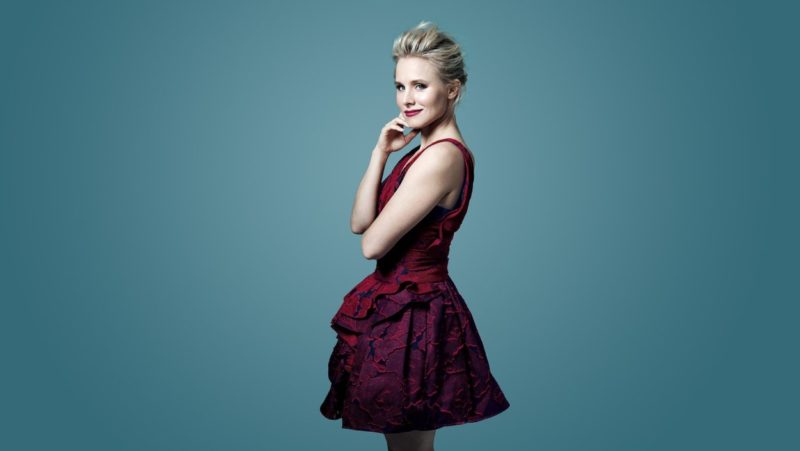 “Over the course of the wedding week, the family’s many skeletons are wrenched from the closet, and the unlikely reunion gives everyone the motivation to move their own lives forward.

A modern wedding comedy for anyone with a slightly dysfunctional family (everyone), or anyone who’s been forced to attend a wedding they tried to avoid (also everyone),” it concludes.

Kristen’s eye-catching bikini scene in the trailer of the upcoming film comes just two months after she shared a rare glimpse of her daughters, Lincoln, 9, and Delta, 7, who she shares with husband Dax Shepard, in family vacation photos, which can be seen below, on Instagram. She revealed the photos were taken on the Snake River in Swan Valley, Idaho, in the caption, and thanked Jimmy Kimmel for hosting them during the fun. The party of four looked like they were having the time of their lives as they posed by the river and climbed rocks during the outing.

The photos came as a bit of surprise considering how private Kristen and Dax usually are when it comes to their family. The lovebirds, who have been married since 2013, aren’t shy about showing off their own bond, however, and often do on social media.

From cute PDA-filled snapshots to videos of them enjoying daily activities, like riding a bike together, they always manage to make their fans swoon over their adorable moments.

When Kristen’s not spending time with her family, she’s stepping out on red carpets as she continues to enjoy a successful career.

The beauty recently reunited with the cast of Frozen at the D23 Expo on Sept. 9. The reunion was part of the event’s Disney Legends ceremony and she was named an honoree along with her co-stars Idina Menzel, Josh Gad, and Jonathan Groff.